This blog is a continuation of my earlier blog: Holiday in North Vietnam (Part 1: Sapa)

After breakfast and by 8:30 am, we were all gathered at the entrance to our hotel ready to climb the Ham Rong Mountain.

Ham Rong Mountain looks like a jaw of a dragon opening wide to the sky.

Legend has it that in the distance past, all animals lived together in a chaotic environment. One day, the Jade Emperor gave an order that every species of animal had to find for them an area to live. Having heard the order, they scrambled for a place to reside.

The three dragon brothers who were living in a large lake hurriedly ran to the east but could not find any place; they then ran to the west. The two older brothers ran fast and came to the destination first. The youngest brother ran slower and strayed into the crowds of lions, tigers and big cats. Fearing that these animals would attack it, the dragon opened its mouth to defense itself.

At that time, the order of Jade Emperor was no longer available, so the three dragons petrified. The two older dragons, which were waiting for their brother, face Lao Cai City, and the youngest one raising its head and opening mouth faces the Hoang Lien Mountain Range. So the mountain is named Ham Rong (Jaw of Dragon).

Ham Rong Mountain is home to some stunning orchid gardens and “rock gardens”. From the mountain, we have the best view of Sapa and the surrounding fresh nature including Mount Fansipan.

We follow the left turn at the entrance of our hotel to hike up the mountain.

Many shops along the route up. James spotted a dead buffalo head.

The shops along the way up. 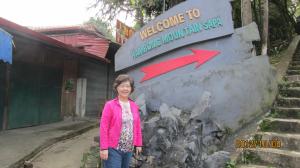 Chee Lan at the start of the steps up the mountain. 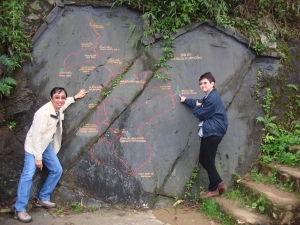 The map showing the routes to attractions up the mountain

Richard wants to trek to the Tram Viba (Microwave Station). 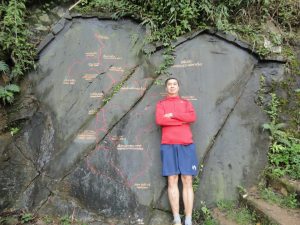 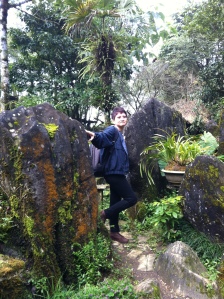 Beautiful rocks among the greenery.

Richard riding on a stone buffalo.

Tomy with a rooster.

James fooling around with a giant cobra.

Tomy with a bugs bunny.

Ham Rong planted among the rocks and greenery.

Siew Wai and her parents.

Direction to have the best view of Fansipan.

An aerial view of Fansipan.

A closer view of Fansipan.

Tomy, James and Chan with Fansipan in the background. 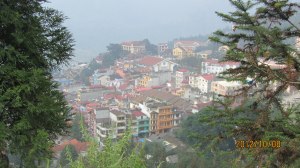 The housing in Fansipan.

Ethnic woman selling souvenirs and handicrafts along the path up the mountain.

The long route up the mountain.

Chan and Siew Wai having a fun moment as siblings. By the way, “wa bo pian” in Hokkien means “I have no choice”. 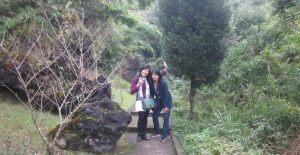 James pointing to a rock that shapes like your left hand showing the thumb, index and middle fingers.

Having some fun on the way down. 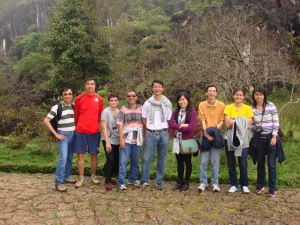 The team that made to the top of the mountain.

We returned to our hotel at about 11:00 am, took our showers, checked out and was on our way for lunch at Red Dao House.

A Red Dao lady welcoming us at the Red Dao House. 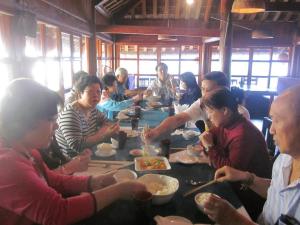 Everyone was so hungry. 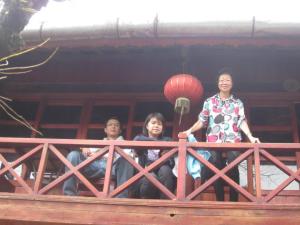 Taking a break after lunch in the balcony of the Red Dao House.

We next headed to the Red Dao Village in Ta Phin…

On our way to the Red Dao Village.

The Red Dao people originated from China and migrated to Vietnam starting around the 12th or 13th century and continuing until the early 20th century. The majority migrated into Vietnam during the Minh dynasty, due to drought, failed crops and the pressures of Feudalism in China.

The Dao consider themselves to be the descendants of Ban Vuong or Ban Ho, a legendary character of the Dao people.

Overtime, the Dao people in China were divided into small groups and they migrated to different places, with some of them coming to Vietnam. During the migration, the different groups incorporated some cultural practices of other nations, creating new, diverse Dao cultures. However, the different groups still maintain a common Dao identity, as they have the same origins and continue to share a common language.

On arrival at the Red Dao Village, we were greeted by a group of Red Dao women.

Finally, we can alight from our bus… 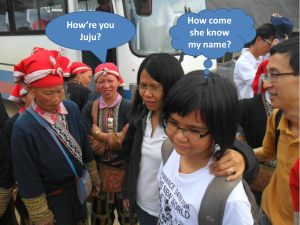 Juju and her parents among the Red Dao women. 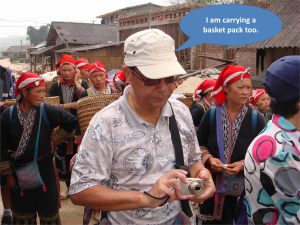 Richard walking with the Red Dao women hot on his heel.

The children playing in the village.

We were on our way to visit the home of a Red Dao woman. 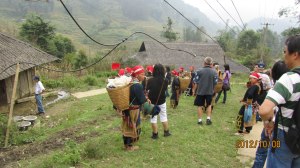 Arriving at the house.

Entering the home of a Red Dao woman.

The man of the Red Dao family sitting in front of the cooking area of his home.

The Red Dao woman and her daughter in their home.

The kitchen area of a Red Dao home. 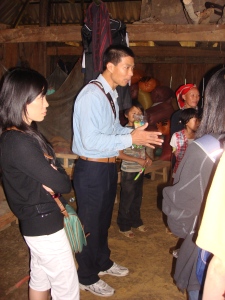 Our tour guide, Dai Thang, explained to us the daily life of this Red Dao family, and the extreme harsh condition in their home. Behind Dai Thang was the bed for the Red Dao woman and her daughter.

An upper deck has a bed where the man of the family slept.

The lamp for the home. 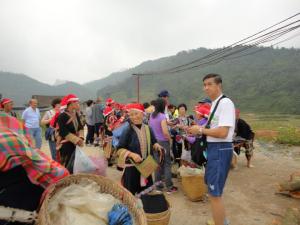 On the way back to our bus, we were given some time to buy handicrafts and souvenirs from the Red Dao women. 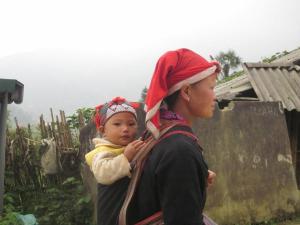 A Red Dao woman and her child. 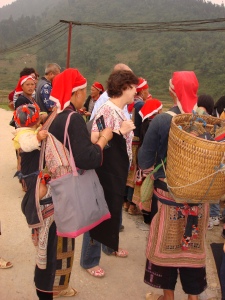 Everyone was busy buying something lah!

Hhmm… Chee Lan whispering into the ear of Lum Wah.

We left the Red Dao village for some shopping at Coc Leu before proceeding to visit Lao Cai International Border Gate. Along the way, we pause for photo taking… 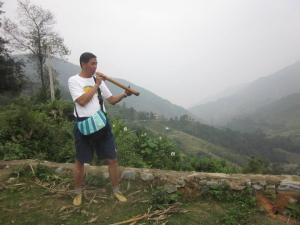 What was James doing? 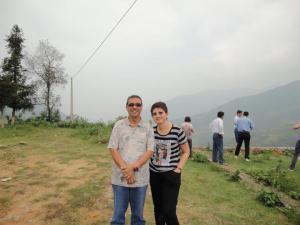 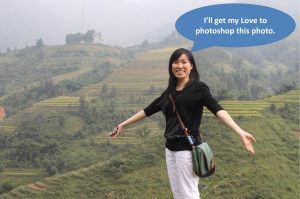 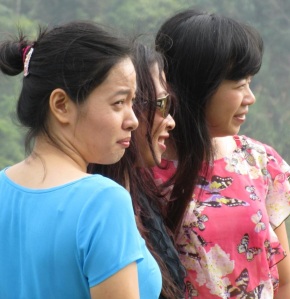 Spotted 3 pretty ladies from our bus taking photos at the same spot as us.

At the Coc Leu Market, the largest commercial center in Lao Cai Province.

Buying some local foodstuffs from this market. 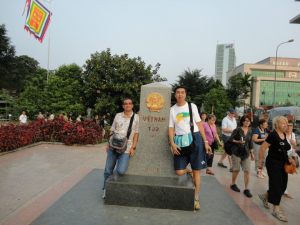 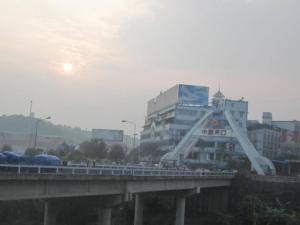 After dinner, we were back at the Lào Cai Railway Station for the train back to Hanoi.

We had an enjoyable two days in Sapa.

I will stop here…

In my next blog, I will share with you about our journey in a cruise and the fun we had in Ha Long Bay: Holiday in North Vietnam (Part 3: Ha Long Bay)

It's my wish to bring Peace and Smile to everyone who reads my blogs. I love all of you. In every thing, give thanks!